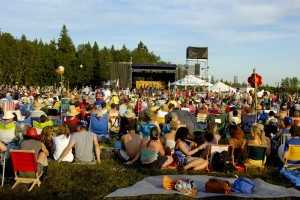 Since the Festival first took place in 1977 it has grown and shaped into a world-class festival. Though labeled as a Folk Festival, the genres of the performers have grown and developed over the years. The festival maintains a traditional Folk feel, including a traditional gathering of all of the day’s performers at the end of each evening.

This year’s line-up includes Folk legend Joan Baez. Born in Staten Island, New York in 1941, Baez became well-known in the 60s and 70s for her role as a Civil Rights activist. Her performance at the 1959 Newport Folk Festival brought pushed her into the spotlight. She quickly established herself as a spokesperson for social change and became known for her rendition of “We Shall Overcome,” that she sang at the 1963 March on Washington. Baez has never wandered far from her political/social cause roots. She continues to perform and be a voice for those who are voiceless in their causes.

The festival, runs Friday, January 29th through Saturday, January 30th, at the University of Michigan’s Hill Auditorium, 825 North University, Ann Arbor, Michigan. Shows begin at 6:30 pm each night. Tickets can be purchased in person at the Michigan Union Ticket Office and the Ark box office; online at theark.org; or by phone at (734)763-TKTS. General public tickets are $37.50 and $50 for a single night; $67.50 and $90 for series tickets. There is also student pricing available for University of Michigan students with valid student ID.

Note: program and lineup are subject to change without notice. For more information about the festival go to theark.org.